David – So, Adrian today we’re going to be talking about two technologies that are out there in the market reasonably cutting edge, I guess we could say. Facial Recognition and also Voice Control. And we just want to explore how those technologies can be applied or potentially applied in the future to commercial AV applications.

Let’s talk about Voice Control. Obviously, a lot of us would have heard about Amazon Alexa, Google Home. They are basically, in our face all the time, in our ears all the time, the commercials just bombarding us. It’s clearly a strong emerging trend. Yeah. I can’t ignore, I guess, and neither can you. We have to accept it. It’s in our lives. And I think you’ve already got some of these technology in your own home, don’t you? Can you tell us about that?

Adrian – That’s correct. My wife got me Alexa for my birthday, and it was something that I was pestering her for pretty regularly.

Alexa has been great. When you go to a fridge and say “Oh my gosh, I forgot milk. Alexa add milk to my shopping list.” Recently, we also have a newborn baby and to track her feeding schedule, every time she feeds, my wife just says “Alexa, I’m feeding now”. And what that does is, every time we open the Alexa app, it keeps a track of all the things that we’ve said. It’s like our personal little assistant. And I can turn on my lights, “Alexa, turn on the lights downstairs”, or “Alexa, play jazz downstairs” and it’s starting to learn our different tendencies of the way we talk and all that other stuff. It’s been fantastic.

David – Okay, perfect! And we’ve seen big AV companies like Crestron, and AMX now integrating with those products from Google and Amazon as well. So, in those residential applications, we might have Crestron control system, or AMX control system, controlling all the lights, and the blinds, and the music, and the other audio-visual elements. You can now use it with voice commands, can’t you?

Adrian – Correct. I’m not sure in a commercial environment though if it’s as applicable. That’s because when I say things like “Alexa, add this to my shopping list” and it doesn’t understand what I’m saying, it’s only my wife who’s laughing at my pronunciation. However, when I’m in front of managers or more senior level staff, it might be a bit unnerving when you’re doing a presentation and you can’t get the system going because it doesn’t understand what you’re saying.

David – Right. I guess if we’re applying this technology to commercial environments now, there are a few things we need to be aware of that maybe aren’t quite there yet. Obviously public space is not a controlled environment. So, the technology is dealing with lots of different people all the time.  And so, it’s hard to adapt, isn’t it? Hard to reduce that margin fairly like what we were talking about. People say things in different ways, don’t they? People might say “Turn the TV on” to try to get it working, and then others will say “Let’s just jump to put my presentation on” and they’re trying to do the same thing maybe but the commands are different, so the system could be confused.

Adrian – Yeah. So, my wife, her father is Filipino and whenever he comes to our house, he always says “Open the lights”. Whereas most people say turn the lights on and off, he says open and close the lights and Alexa never understands what he’s saying.

David – Oh well, that’s a classic example of what could go wrong. But I think the technology is fantastic, would you agree? Clearly, the future is for this technology to be in commercial environments such as a workplace or any other areas. But, maybe, not quite yet ready. So, just some things to be aware of there.

Adrian – Yeah. Imagine in the future we just have to say, “Call David Allara” and it calls you straight away. It turns on the screen. It turns on the video conferencing codec. Gets the camera zoomed in on you and it saves you all those buttons but like you said, it’s not quite there yet. So, we can look forward to that.

David – And then the other technology, Adrian, I wanted to talk about is Facial Recognition. We see this in security. It’s been around for a while in security and obviously extremely useful in that specific area or application. It would be interesting to talk about how that technology could be put into other different environments and see if it’s useful or not. Yeah. One example is Digital Signage. I think we know in commercial Digital Signage, Facial Recognition is now starting to being used more and more.

Adrian – Absolutely. So, Samsung and NEC, specifically, are specifically manufacturers that are really pushing Facial Recognition. There’s applications such as logins but one really powerful one that I tend to agree with, is screens that are now looking at us, the consumers. And whenever we’re in retail stores, now their screens are looking at our age and their looking at our gender.

So, the advertisements that are on those screens are actually based on who we are. A kid would be more receptive to an advertisement about a toy or a video game, whereas a female will be more inclined to pay attention to something from Forever 21 or stores like that, I suppose.

David – Yeah, okay. So, this is a bit of a win-win here. We’re saying if you own that Digital Signage platform, you, all of a sudden, have the power to command more revenue from your advertisers and say “Listen company, I can guarantee that I’m going to get your advertisement on the screen at the right time in front of your key target audience almost every time” and that’s worth a lot of money.

Advertisers are going to pay a lot more money for that type of guarantee than the traditional of “It might get to the right people at the right time. Just put it on and hope”. So, huge win there for both the companies who own the platforms and also the advertisers that advertise on those platforms. Isn’t it? Absolutely. There, we can see technology is really helping those types of companies in those applications. That’s already here, isn’t it? Yeah. It’s a great return of investment for both. It’s already here that technology, isn’t it?

David – And what about it in the office, we talked about this just offline, you were saying that Facial Recognition to login? Can you tell us about that a little bit more?

Adrian – Some laptops have had a bit of a clunky Facial Recognition to login and they’re still developing it but what they are now starting to put is that technology in Meeting Rooms as well. Okay. Sometimes, people get scared when they go into Meeting Rooms. The applications are not quite the same as what’s at their workstation. Yeah. And what they’re doing is bridging that solution of using your face to log in at your workstation and using your face to log in in the Meeting Room, and there, the user interface looks exactly the same. So, it’s no different moving between them. You don’t need to login and log out. It just uses your face.

David – Well, that’s powerful. I suppose you could link that to back end systems as well, like Room Booking systems.  So, if you book a Meeting Room with a video conference call to a group of participants, you just walk in, you get recognised, the call starts. Amazing! However, it sounds like there could be a little bit of work on the back end to get this up and running. Would that be fair?

Adrian – A substantial amount of work in the back end. Now, with us, regularly we just have to log in with the username and password but now you need to have the entire biometric formula for each person’s face and each staff member. Even on boarding the staff is now becoming a much more extensive process.

David – Okay. Definitely another one to look for in the future but just be weary there’s a lot of work to get that up and running. Not just dive into it. You need a forward plan. Is that a fair statement?

David – Well Adrian, thanks mate. That is very informative. Two great technologies: Facial Recognition and Voice Control. We’ll be looking forward to seeing those in the near future in commercial applications. 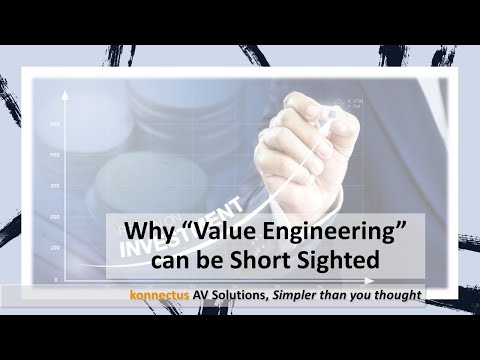 Why “value engineering” an av technology solution can be short sighted